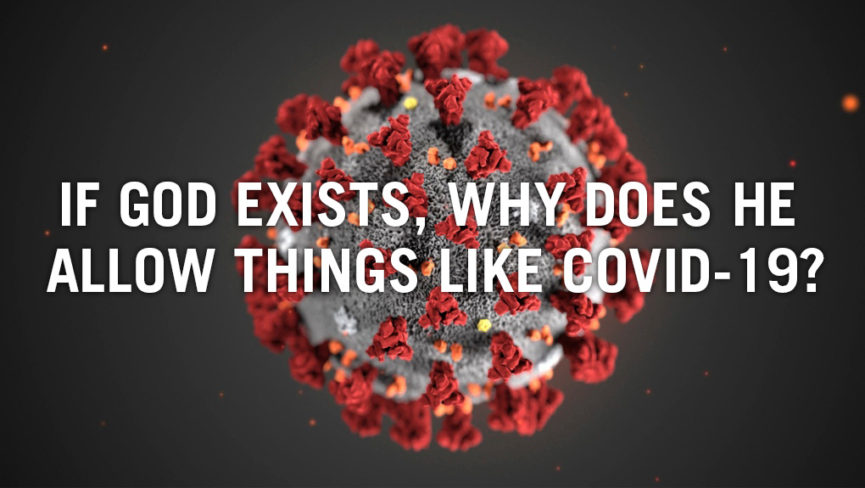 Of all the objections skeptics raise in relation to faith and God, the problem of suffering has to be the most popular. The line of reasoning skeptics employ is pretty straightforward:

This sound bite of philosophy has been used repeatedly by those who would discredit belief in God and any religious faith. Atheism’s foremost voice of this generation, Richard Dawkins, has been using this logic for decades now. Long before his most popular work, The God Delusion, came out in 2006 he expressed the same frustration in his 1995 book, River Out of Eden: A Darwinian View of Life:

In a universe of electrons and selfish genes, blind physical forces and genetic replication, some people are going to get hurt, other people are going to get lucky, and you won’t find any rhyme or reason in it, nor any justice. The universe that we observe has precisely the properties we should expect if there is, at bottom, no design, no purpose, no evil, no good, nothing but pitiless indifference.

Dawkins is pretty honest about how gloomy a godless universe should look. But many philosophers have pushed back against the perspective that Dawkins espouses. Decades ago, men like C.S. Lewis, who himself began as an atheist, were forced to change their perspective when they analyzed the reality of the world around them.

My argument against God was that the universe seemed so cruel and unjust. But how had I got this idea of just and unjust? A man does not call a line crooked unless he has some idea of a straight line. What was I comparing this universe with when I called it unjust…? (C.S. Lewis, Mere Christianity)

As I pointed out in my book Unapologetix, prominent atheists have been known make reference to the worms and parasites that sometimes wreak havoc on the human body, asking how a God so intent on beauty and pleasure could possibly allow something so ugly and unpleasant.  But it doesn’t take a great philosophical mind to understand that we can only label the worms and parasites as awful in juxtaposition to all of the beauty and pleasure that we enjoy on a regular basis. Neither can we complain about injustice we see in the world, if — as Dawkins says — we have no reason to expect to find rhyme, reason or justice here. No, the average person knows in their heart that the world is fundamentally a good place and that a sense of justice is somehow anchored in each one of us.

So then, back to our first question: If the world is good, and fashioned by a loving, all-powerful God, how do we account for all of the evil and suffering? It is here that I will point out that the atheists’ reasoning (that I outlined above) is flawed. It is not airtight, as it makes logical assumptions. It overlooks the possibility that evil and suffering serve some sort of purpose in the universe, and that God might allow them to exist — at least for a time — in order to accomplish something of even greater value.

The biblical device (although I believe it to be more than a device) for making sense of the problem of suffering is the curse that was placed on humankind after our fall into sin. Genesis 3 contains the story that serves as the foundation for understanding life’s most perturbing question — the question of suffering. The ancient narrative explains how the first human beings, Adam and Eve, acted on humanity’s behalf and chose to rebel against God, dragging all of humankind into sin. After confronting the man and woman over their sin, God imposed an all-encompassing curse upon them and upon the physical creation, a curse that would include everything from pain, to disease to death. A bit of reflection would lead the reader to conclude that God was making a very powerful statement: The purpose of the curse was to permanently and constantly remind humankind that the world was not right.

It continues to remind us today that the world is not right. According to the biblical narrative, every time you see spots on your apple, experience sickness, encounter a disease or disability, attend a funeral, catch a cold or hear a chid cry — God’s intention is to remind you that this world is messed up and not what he intended. So, when bad things happen, things like Covid-19, we must not fail to see the bigger picture of what God is doing in the world.

Now, it is important to understand that God is not the author of sin; he is perfectly holy and incapable of doing wrong. But in God’s understanding of what is good, freedom is high on the list. Even the Garden of Eden was fashioned in such a way as to give humans a choice of accepting God’s authority or not. Sin is not God’s creation, but true freedom seems to require the possibility of sin.

In the New Testament, Jesus’ parable of the Prodigal Son demonstrates the same truth. In it we see a son who chooses to rebel against his father, take his inheritance, leave home, and squander his father’s wealth on riotous living. While it broke the father’s heart to let him go, he knew that this was necessary for his son to come to understand the bigger picture. Eventually, the son comes to his senses, returns home, and enjoys a relationship with his father that he never had enjoyed prior.

As a pastor, nothing brings me greater joy than to see people wrestle with the question of suffering and to arrive at a deeper understanding. As students of the Bible come to understand God’s plan for history (often summed up in the words “creation, fall, redemption and restoration”), the sharper students grasp the question that begs to be asked: “Why is God allowing all of this suffering if the end goal is simply to get humankind back to the state of bliss we already enjoyed in the Garden of Eden?” It always brings a smile to my face.

I have come to believe it’s for the experience. Innocence is beautiful, but it’s not the best that can be. The Bible reveals that God’s ultimate desire is to have a perfect relationship with his creation, and the simple fact is, without this experience we call human history, we would never be able to truly appreciate God. Had we lived on in innocence, we could have respected God in the way a child looks up to their father, but we could never have come to appreciate God’s holiness, his value of freedom, his mercy and grace, his patience, and most of all — his love. The prodigal son understood his father in a very different way at the end of the story, and I believe God wants us to come to understand him in a very different way as well.

So why does God allow things like Covid-19? It’s just one more way that he is reminding us that this world is not right, that it’s not what he intended. Viruses are just one more part of the curse that he instituted out of love for us, something that would drive us back to him. When you understand things in this way, Covid-19 serves a very important purpose. It is quite literally intended to make you discover the love of God. Out of context, that may seem backward and cruel. The prodigal son had to sit in the mud with the pigs for a while before he could see it clearly. But he finally got up, shook off the mud, and returned to his father where a celebration like nothing he had ever experienced was waiting for him.

My prayer is that many who are sitting at home with a little extra time to think will ponder these ideas. I hope that you will look around and see how God made our entire human experience reflect these truths. Everything God has made grows and matures. Innocence is beautiful, and there is a time for it, but it doesn’t last forever. Nor should it.

They say that no child appreciates their father or mother until they themselves become one. But with that maturity comes the precious ability to relate to our parents in ways that we never could have as children. Someday God’s children will sit down with him and appreciate him in ways that Adam and Eve never could have. And things like Coronavirus will make sense. In fact, the apostles firmly believed that increased suffering in this life would only make our time with God even more glorious in eternity. That seems like a pretty good thought to hang onto over the upcoming months.